The Makgadikgadi is a place of wide-open, uninhabited spaces under an endless canopy of blue sky. The remoteness, inaccessibility and danger of the pans all add to their allure.

It is a vast expanse filled with subtle hues and surrealistic beauty. Almost the size of Portugal, the pan covers 12 000 square kilometres and is the largest saltpan in the world. The pan is only a portion of what used to be one of the largest inland lakes in Africa. 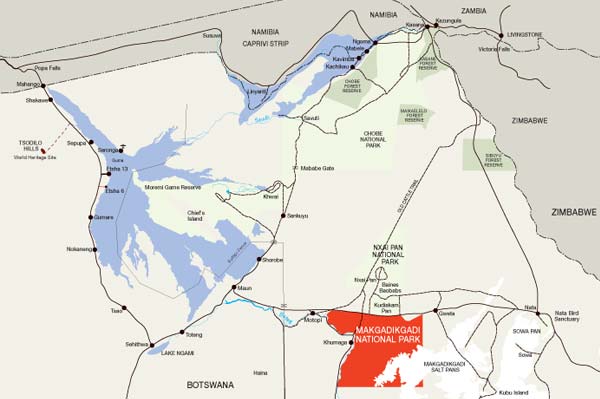 The area is comprised of the Sua and Ntwetwe pans. During the heat of the late winter day, the pans become a shimmering mirage of disorienting and ethereal austerity. The large number of small villages and the small stone age tools and other artefacts that can be found scattered around the islands (for example on Kubu Island), all point to the fact that the Makgadikgadi Pans have supported human habitation, and their livestock, for a very long time. At one time the Makgadikgadi Pans were important as a major trade route.

In September large herds of antelope, zebra and wildebeest roam the dusty plains awaiting the first rains. On their arrival the waters turn the pans into a perfect mirror of the sky, distorting all sense of place and time. Although these rains are short lived, in December another deluge turns the edges of the vast pans into waving fringes of green grassland where herds of wildlife converge to partake in the bounty.

Flocks of birds arrive to build their nests along the shoreline of the Nata River, in Sua Pan and feed on algae and crustaceans that have been lying dormant in the salt and sand awaiting the drenching rains.